Here is the english version of this older post - http://polarlightwolf.livejournal.com/87855.html 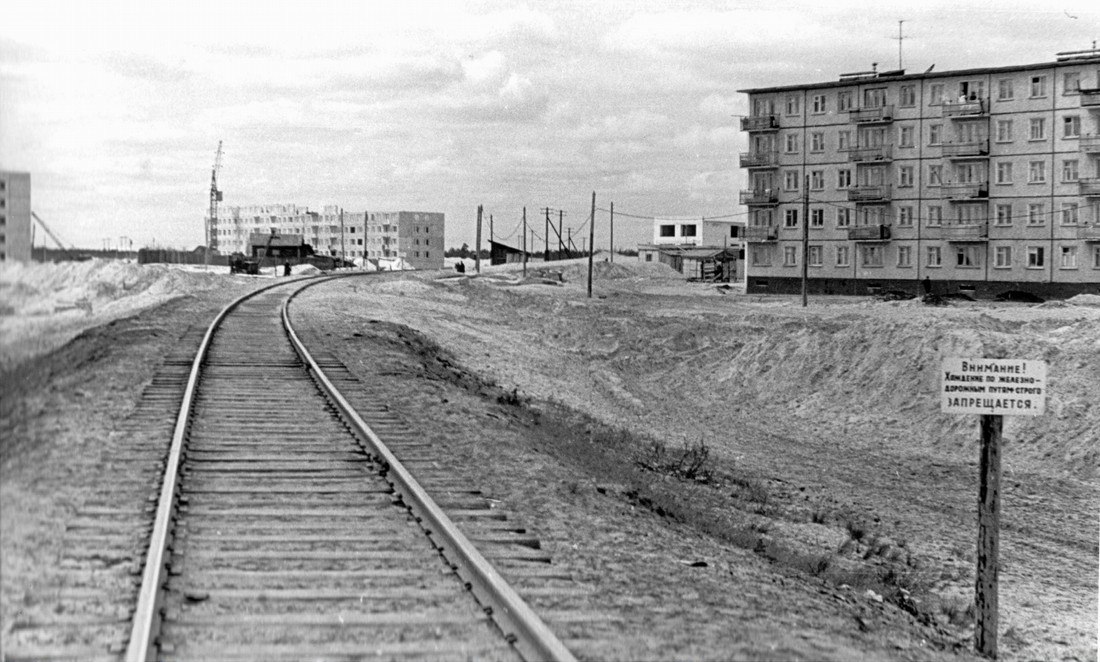 Since foundation of gunpowder plant (named after Y.M.Sverdlov) in 1916, it had railway connection to main Moscow-Nizhny Novgorod line, and it passed through wastelands and forests western Rastyapino station. Years after, when town of Dzerzhinsk was established and began to grow in all directions, especially, to the west, this line remained till the early 1970s. 5-floor appartment buildings (known as "Khruschevki") surrounded it. In 1973, when western railway detour was built, freight traffic was switched to that new track, and line through town was demolished. It's trace was occupied by other planned houses. Few obvious remains are located in some places - mound from main railway station through Pervomaysky forest (partially barbarously cut down), to Tereshkova's and Gaydar streets crossing. Also, mound remained on Patolichev street, near firefighters depot.

Part of that old line remains today, and it was in work till about 2008. It served for warehouses on Sukharenko street.


And for me it was very interesting - where exactly that line was in the town? What wasit's original tracing?

01. So, lets look on remaining parts of mound. Fragment near Patolichev street: 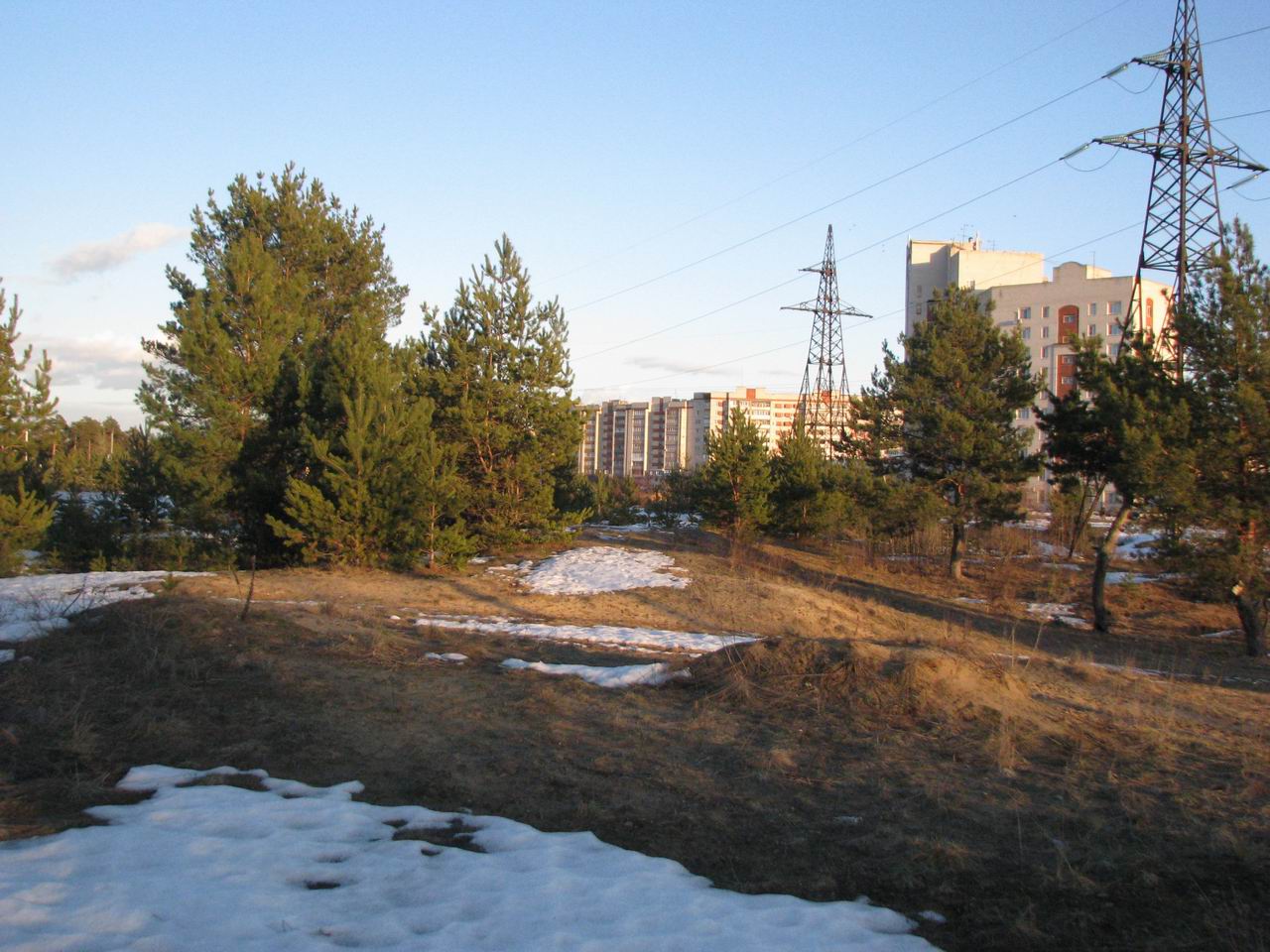 Ten years ago i even seen pieces of sleepers there. Used for walks and unfortunately, littered.
03. Even some supports of eqipment cases remains 05. And connection to Dzerzhinsk main station Now, remains of tracks, which were the parts of that line 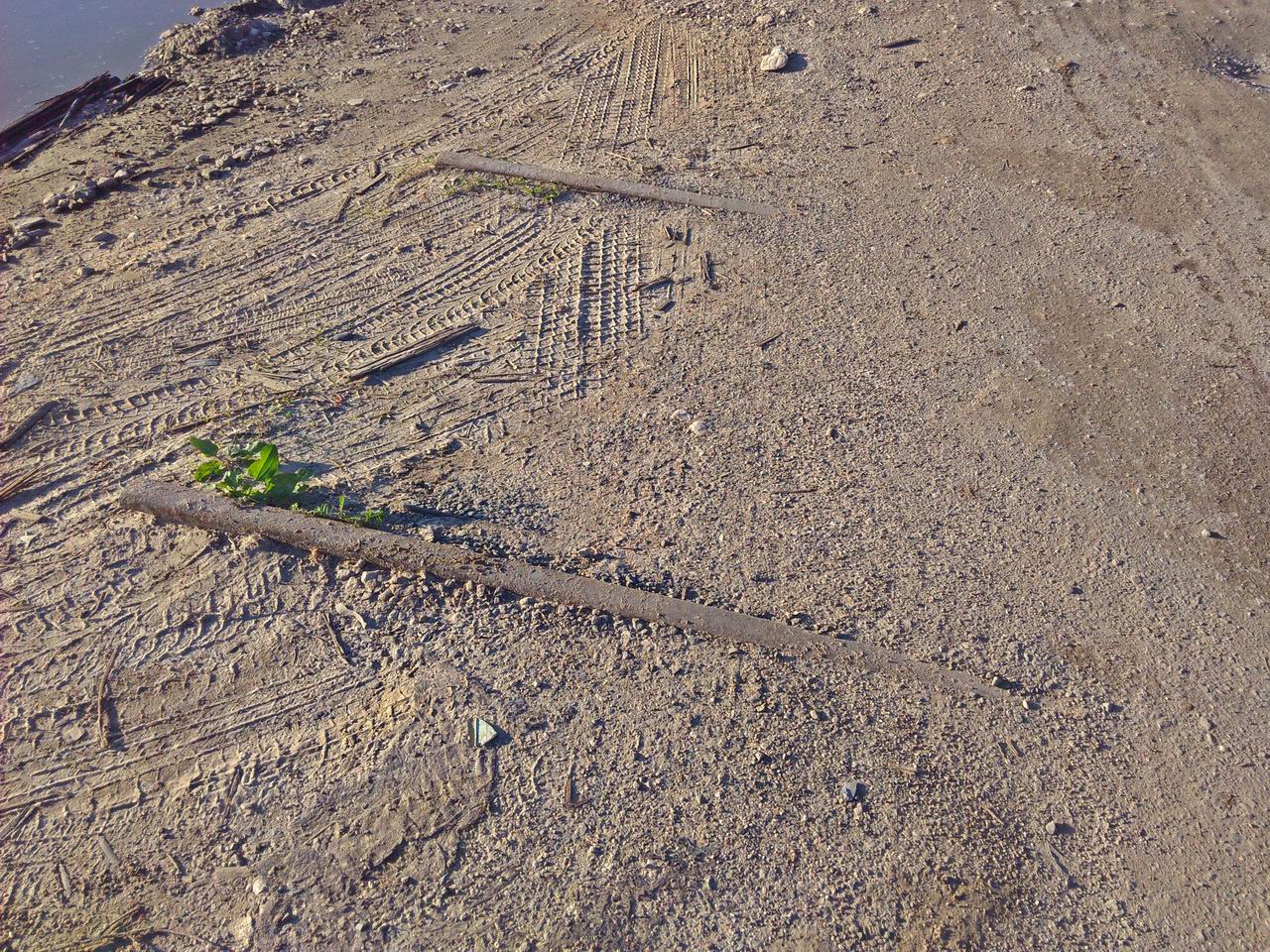 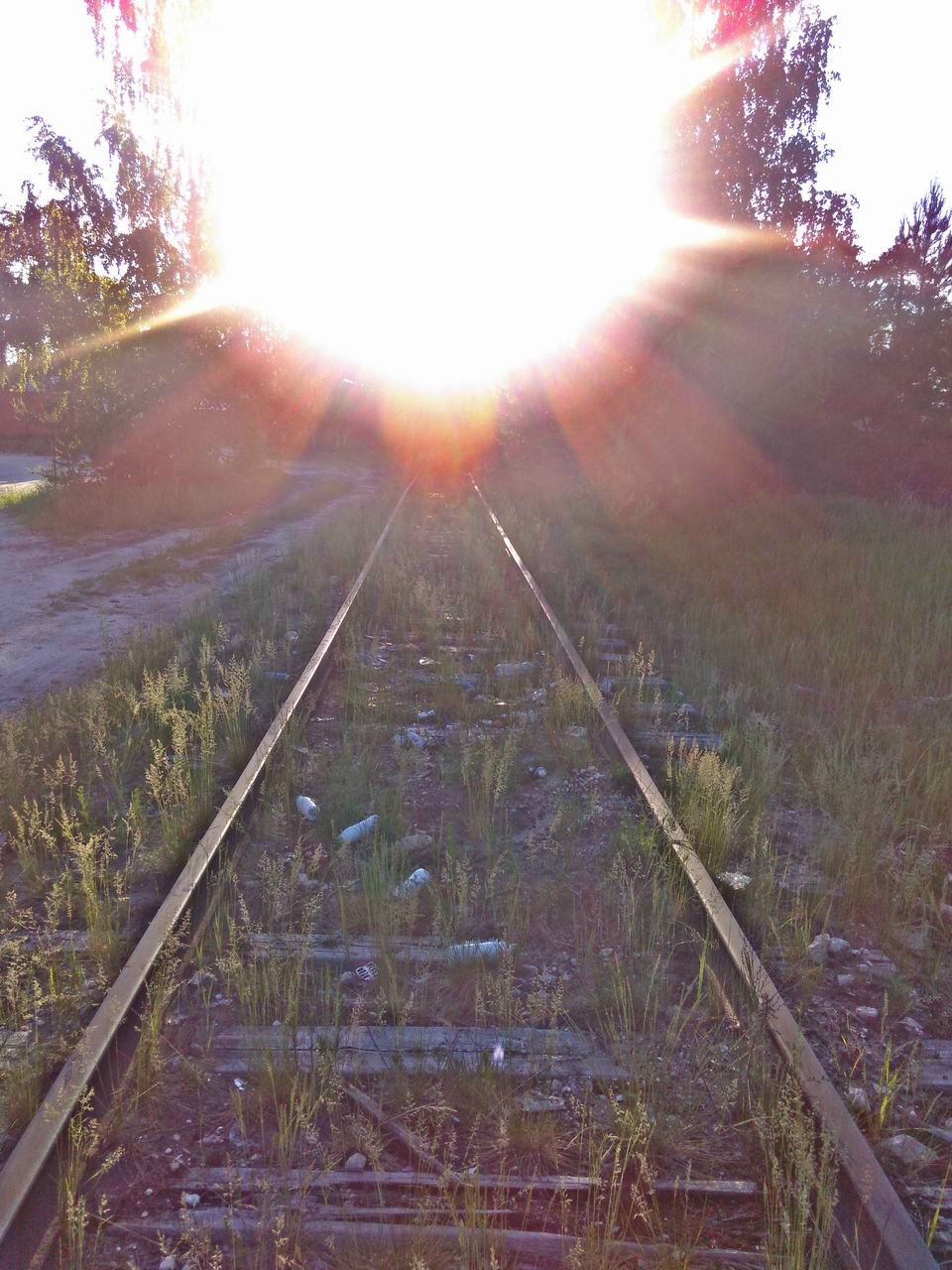 Some of rail fastenings missing 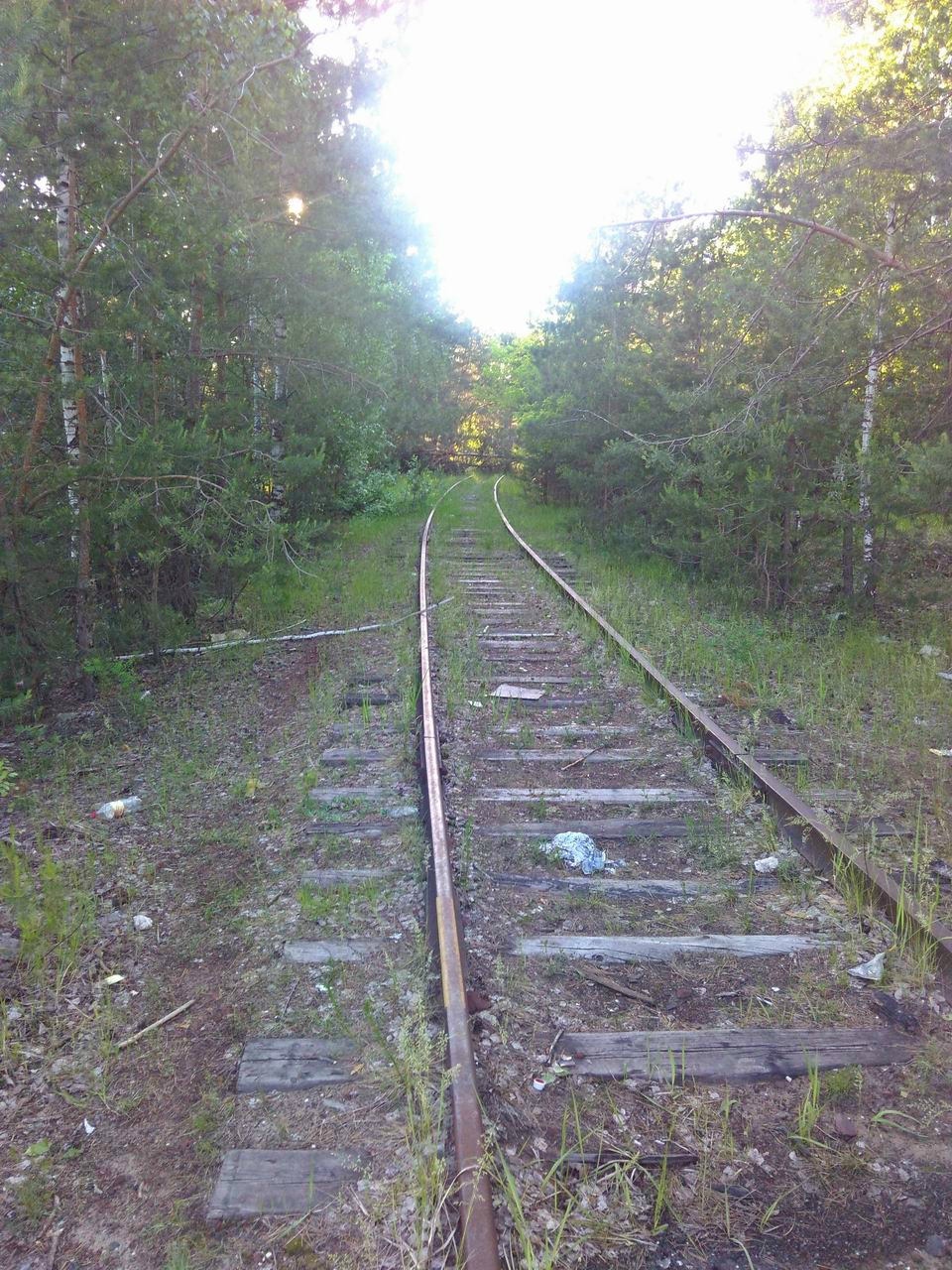 (Surprisingly - This place located only in one kilometer from my home, but i visited first not so long ago O_O) 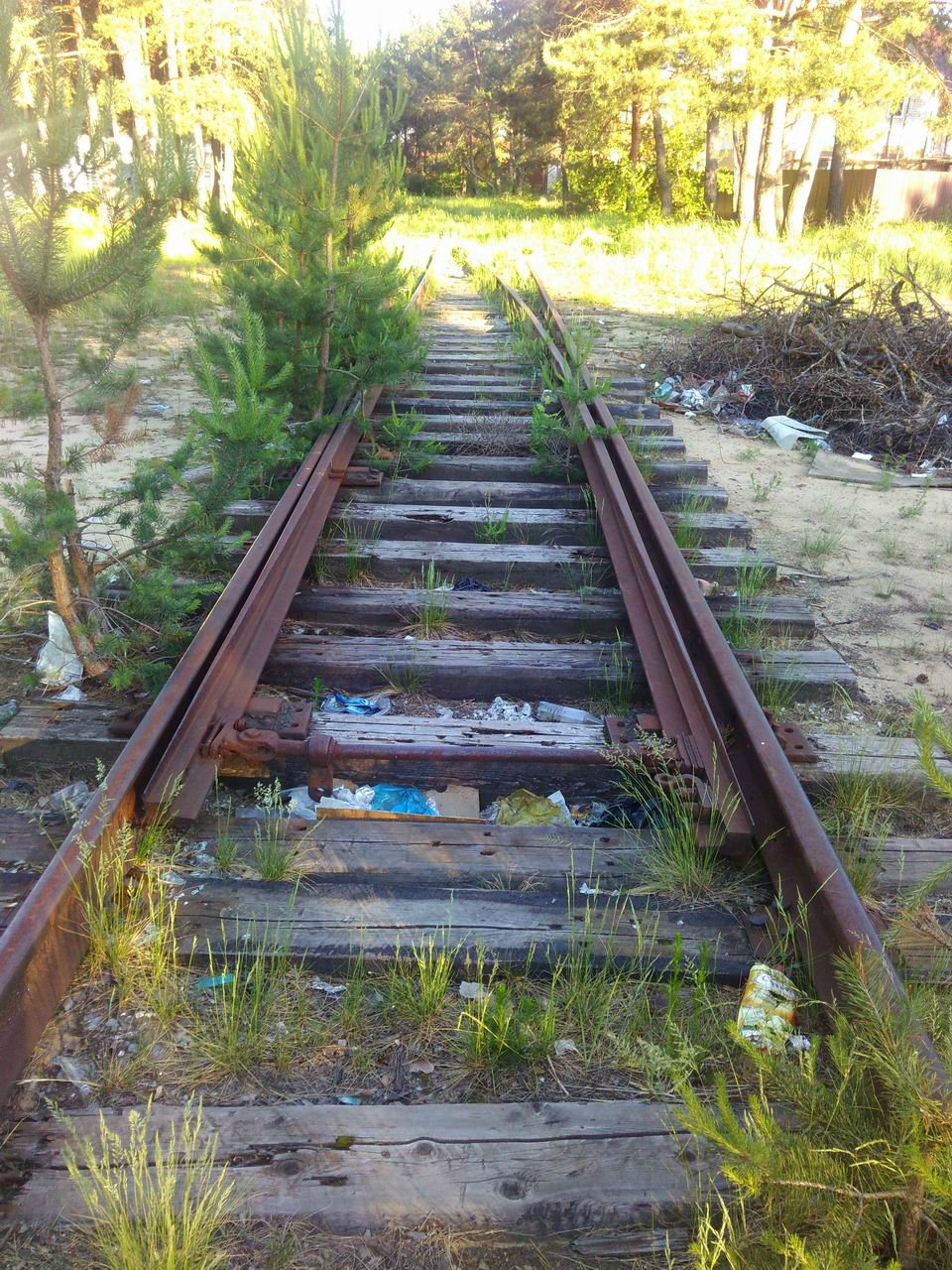 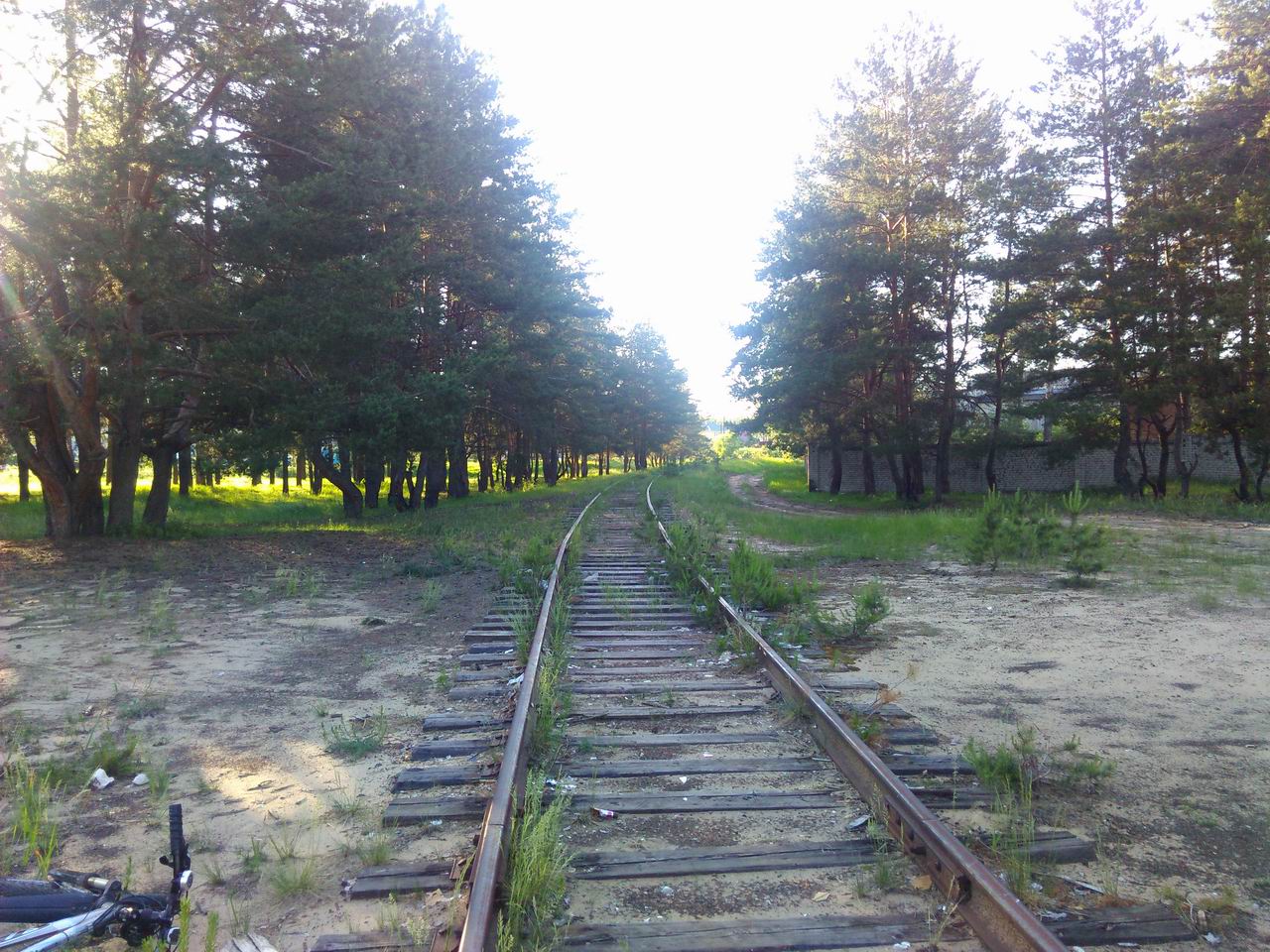 11. It could me good place for walks, if it wasnt littered.. I hope this part of forest will remain and not be given to some deputy-businessmen. 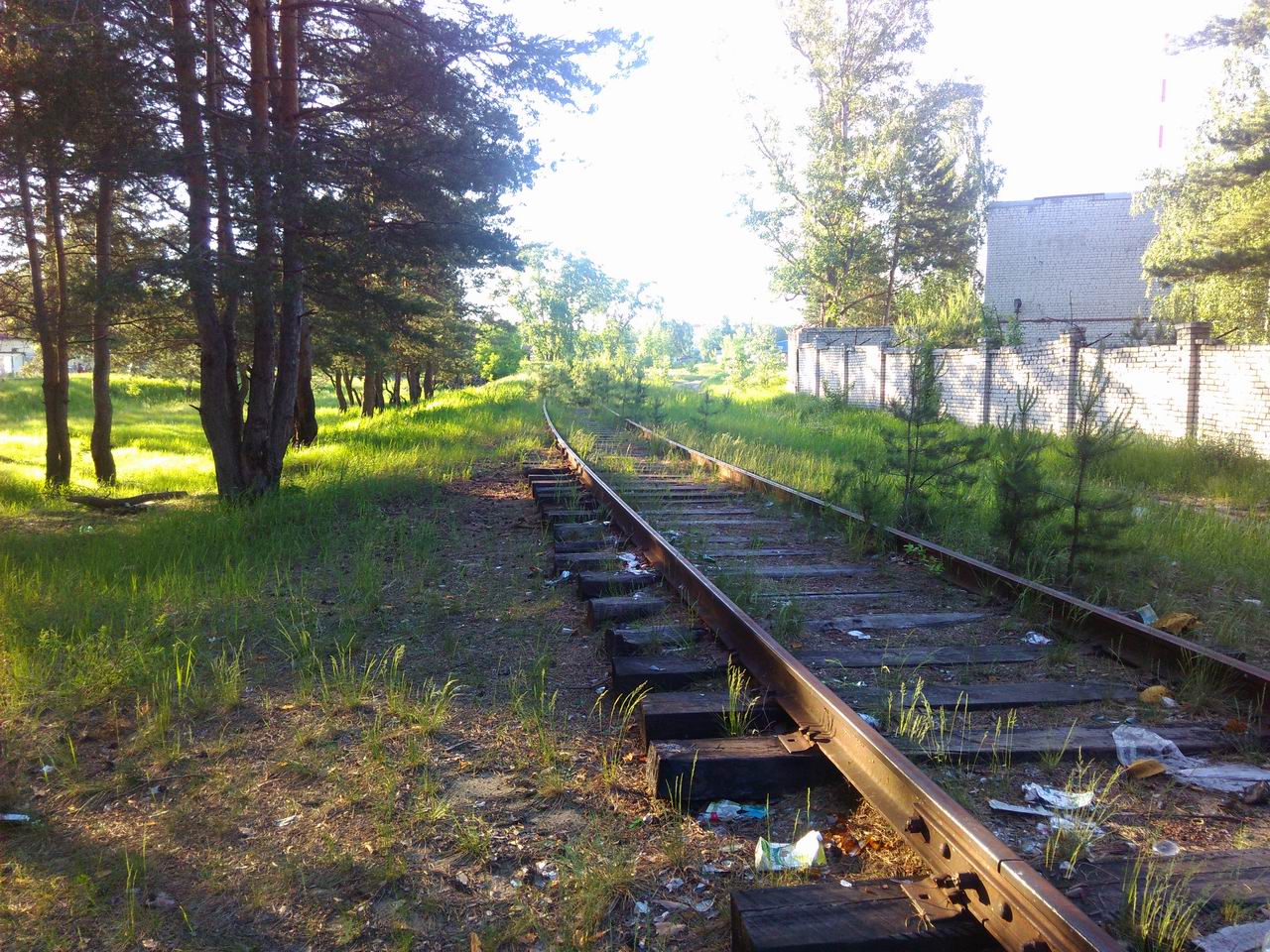 Historical evidences, some of them appeared in internet recently:

No one from my relatives remember where exactly that railway crossed Tsiolkovskiy av. But in autumn of 2014, in one group, this photo was published:
12. This is the unique photo. Railway crossing trace of future Tsiolkovskiy avenue. On background - construction site of 5-floor house, on the right - same house, but seems to be inhabited (house #44), and between them - kindergarden under construction. And, maybe, track shed. What was the another wooden house - i dont know.

Other photo is from 1969. Line still works. Look, how dry and barren the land is. Town is built on sands, and even tram tracks were often corered by "dunes". Only after hard work of foresters some of forests were recovered. (and now they are being cut down again...)


There are also later photos of this place:
11. Mound is seen, but without rails. Also, there are bus terminal stop on the right, and LiAZ-158 on it. Avenue continuation is being built. "Universam" shop is finished. 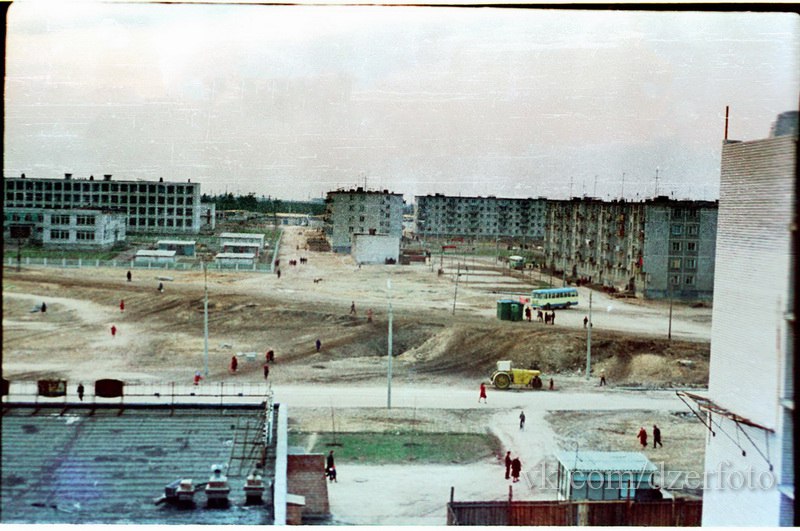 12. Few months later, as it seems:
Avenue goes far, and Ikarus-180 bus driving on it to the west. 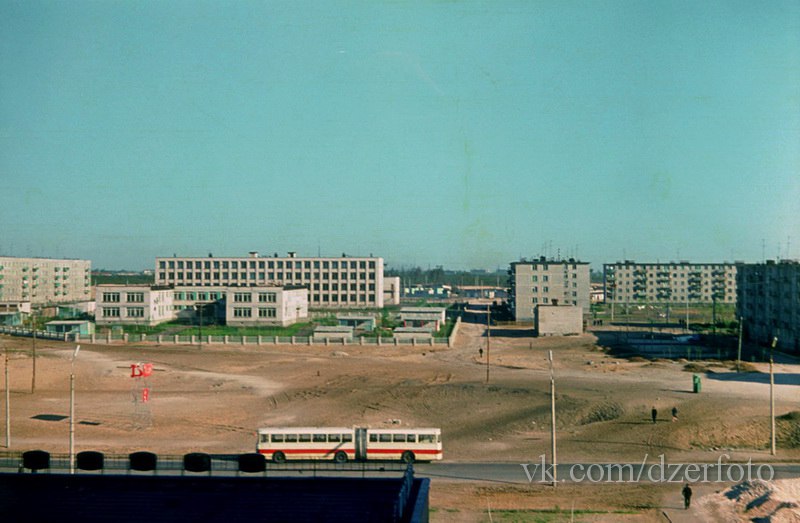 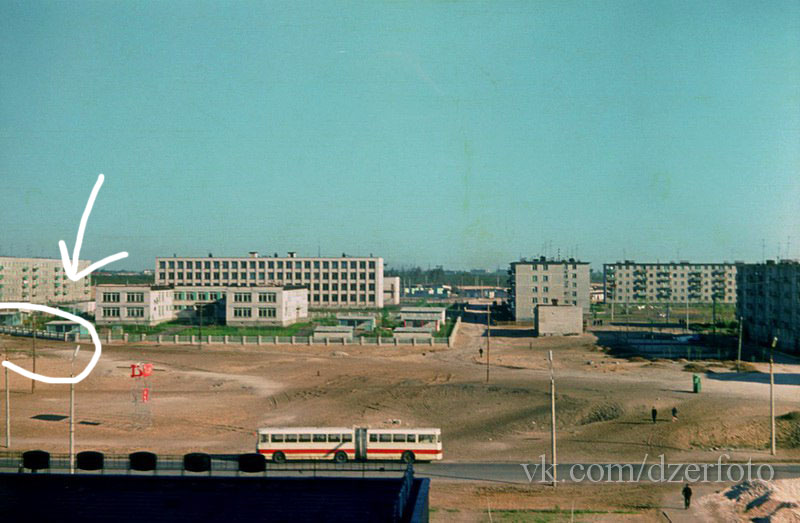 Kindergarden fence has a beveled corner, and it follows direction of the mound, that is seen on previous photo. No traces of tracks, sleepers or so on.

So, now we know another one piece of the railway

Other parts of railway tracing remanied uncertain. There was no map of town of early years - they were secret (former town's main ecologist comfirmed it). This maps can still be in archives.
And due to that, i thought to try to reconstruct placing of the railway, by houses building dates, in microdistricts, which it was passed through.
Most of housing is built in 1968-1969 - panel 5th floor "Khruschevki". But some houses were built later.

According to housing database, i found out the dates of building:
15: 18. Add known parts of the railway:

19. And try to draw approximate tracing of line:

As it seems, line haf two main straight sections and two curves of different radiuses. Interesting, that direction of one of the straight parts is the same for Tereshkova street. 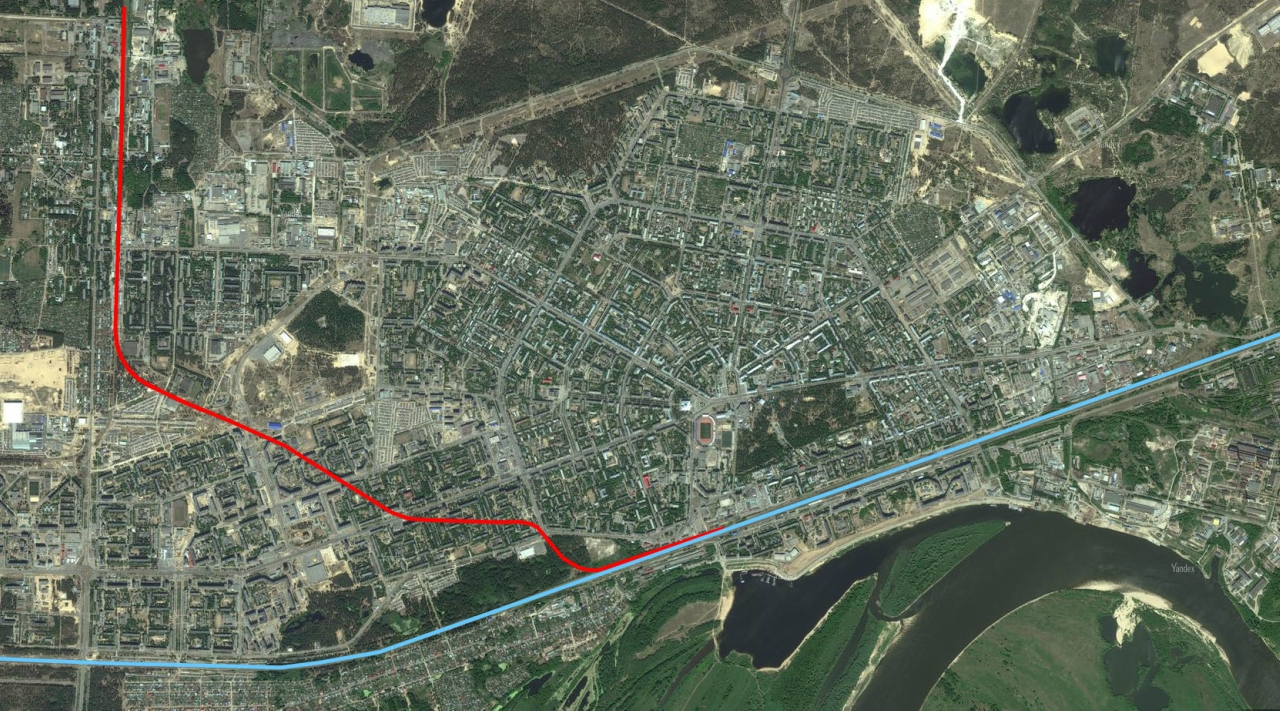 21. After the western detour (big loop-like track) was finished. City planned to grow further to the west direction, and dangerous cargo needs to be out of housing. 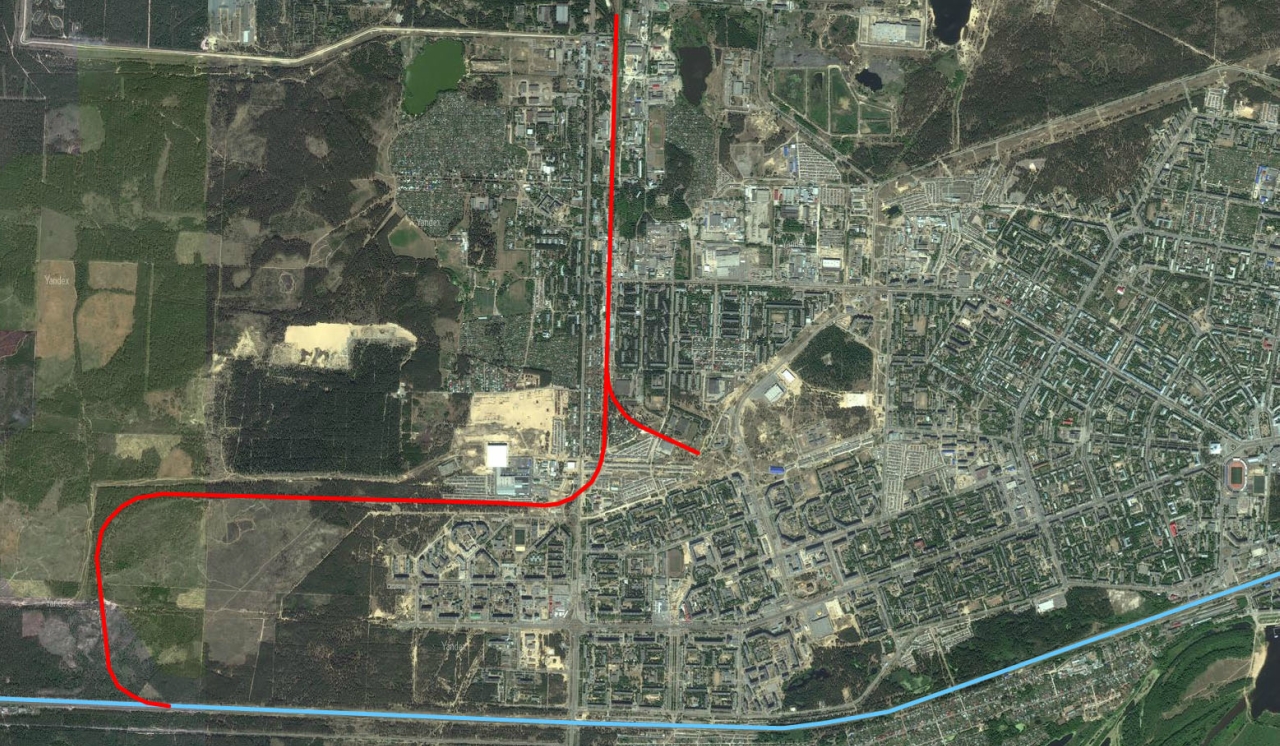 As i told before, part of original railway tracing remained as access tracks to warehouses and fabrics, beteen Patolichev and Schors streets.

22. Also, part of western loop is built of mound of former narrow gauge railway from Zholnino station to Sverdlov's plant 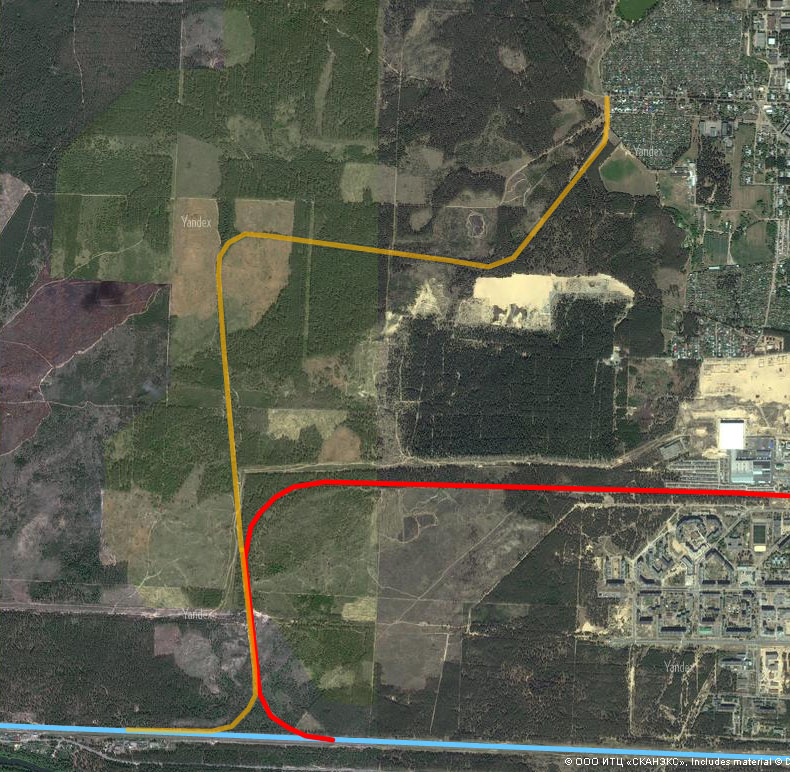 But there's not so much information about it. It is only known that it was built for peat quarries on the north, crossed Moscow-Nizhny Novrorod road. It was closed in 70s. It may had connection to bigger narrow-gauge network on the north.

23. Nowadays, remains of original line, access tracks are not used, and partially stolen for scrap metal. Seems to be, tariff policy made railway freight operations nearly impossible for the small companies, and they transport goods by trucks, which is only leading to big ware-out of road surface...

(after three weeks switch was stolen)

So, this is my story. Experience of reconstruction former railway tracing was very interesting.

Some update:
One of Dzerzhinsk's forum wrote:
"My father lived in house #32 on Tereshkova street. Every morning he was going to work, and seen the station on Gaydar street, and in 6:10 there was the train with 5 cars, departing to the plant. This were before 1972. "
(ссылка)

Recent Posts from This Journal